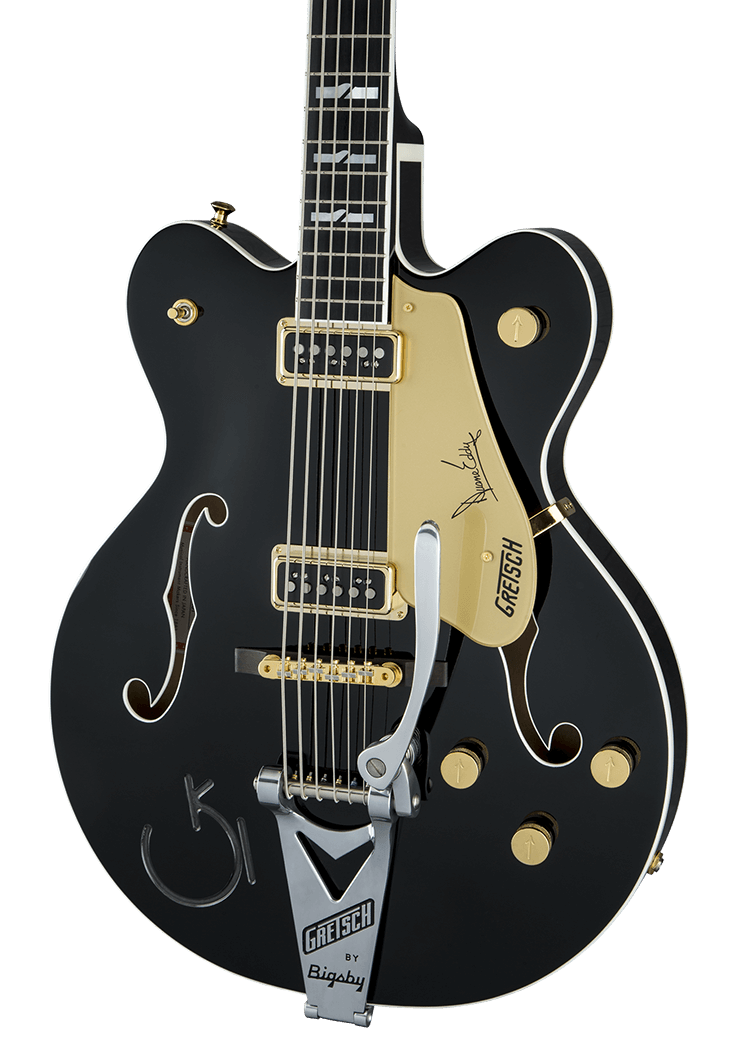 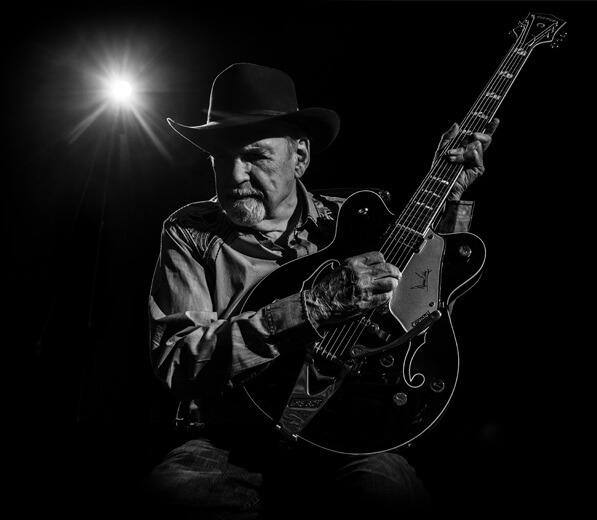 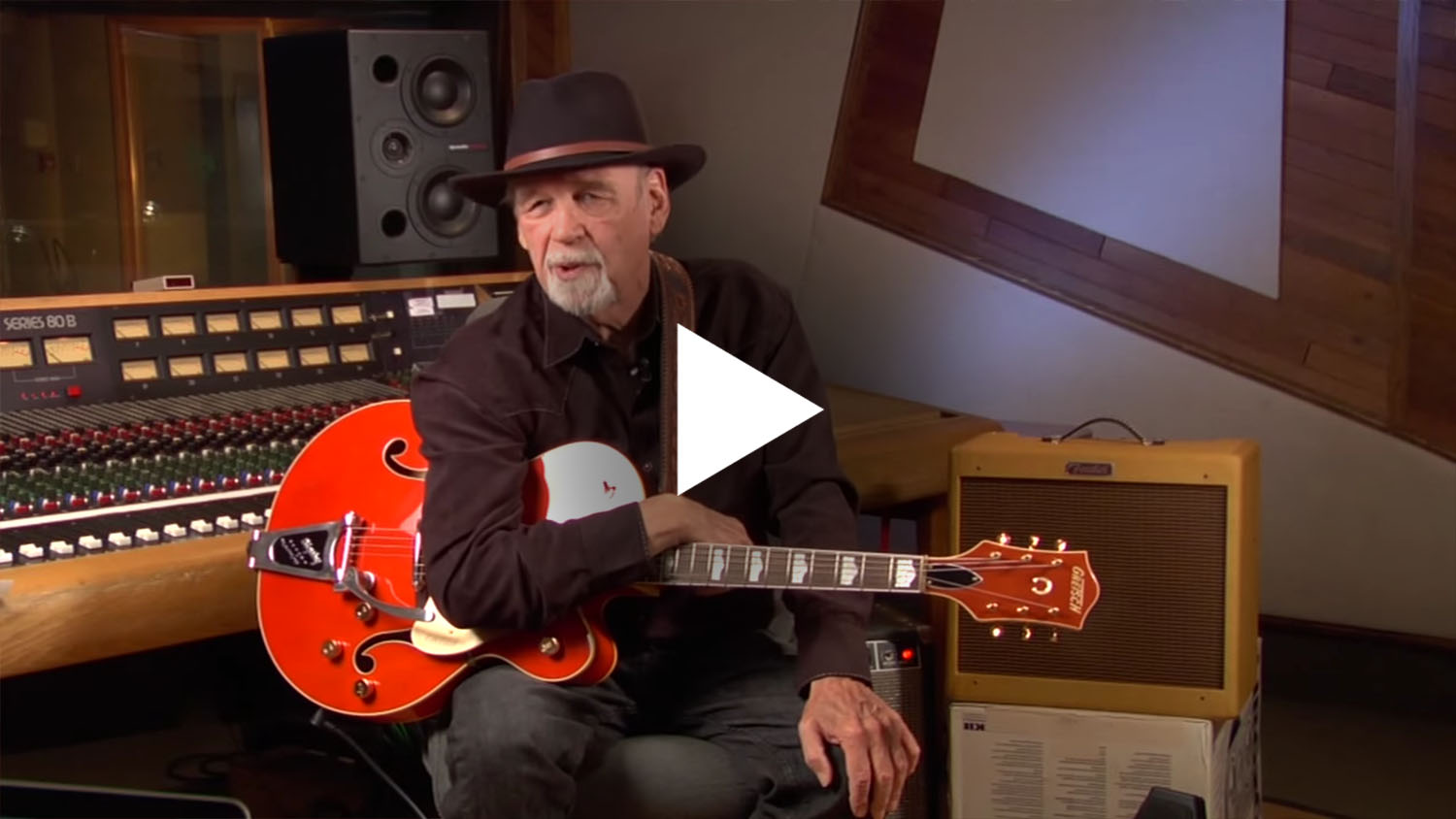 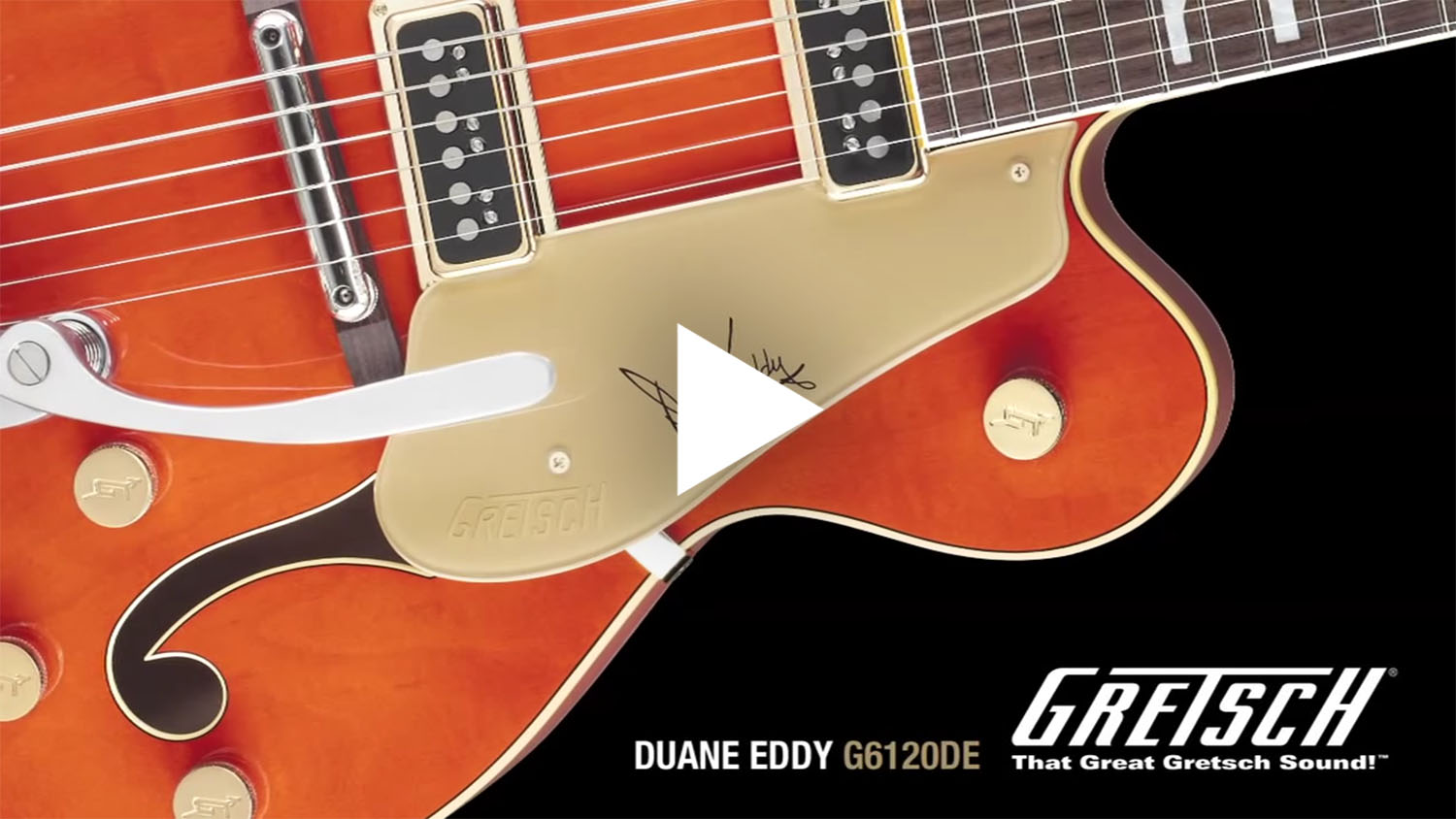 One of the most basic and immutable foundations of rock music is the low-note guitar riff. From the Rolling Stones’ “Satisfaction” and the Beatles’ “Day Tripper” (1965) to Bruce Springsteen’s “Born to Run” and Aerosmith’s “Walk This Way” (1975) to Metallica’s “Enter Sandman” (1991), the eternally resonant low-note guitar riff has launched many a timeless hit and set many a guitarist on the path to glory.

For this deeply reverberant and irresistible musical phenomenon, the world can thank the artist who pioneered and popularized it, the great Duane Eddy.

Eddy will be forever revered as an original guitar hero who put a deep and resounding twang into rock ‘n’ roll. On a string of late 1950s and early ’60s instrumental hits, he used dramatic single-note melodies on the lower strings of his guitar, pronounced tremolo and vibrato, and liberal doses of echo to produce a signature sound that evoked souped-up cars on Saturday night one minute and the wide-open vistas of the Wild West the next. He became the most successful instrumentalist in rock history, charting 15 top 40 singles from 1958 through 1963 and selling more than 100 million records worldwide.

In the early days of rock ‘n’ roll, the notion of the lead guitarist being the charismatic figure in the spotlight was completely novel, but Eddy made the guitar player a front-and-center figure. Quiet and unassuming offstage, he cut an indelible figure with an electric guitar in his hands, creating a defining idea of what it meant to be a rock ‘n’ roller.

Duane Eddy is still going strong, and in 2016, Gretsch is very proud to continue to pay tribute to this legendary guitarist by adding two new limited edition finishes to his Gretsch G6120DE Duane Eddy Signature model hollow body guitar, first introduced in 2011. A single-cutaway beauty with classic styling and full, resonant sound, it combines features based directly on his original 1957 G6120 model (i.e., trestle bracing and slim neck profile) with modern Gretsch features (i.e. Tru-Arc™ “rocking” bar bridge and extra long Bigsby® string-retainer pins) that all together pay fitting tribute to the undisputed King of Twang. The pure sound of Duane Eddy is the pure sound of a great Gretsch guitar, and the G6120DE resonates with his amazing sound and his amazing rock ‘n’ roll legacy as a true “Rebel Rouser” of an instrument

Born in Corning, N.Y., in 1938, Eddy began playing guitar at age five, emulating his cowboy hero, Gene Autry. The Eddy family moved to Arizona in the early 1950s when Duane was in his early teens, by which time he was already an able guitarist with a distinctive approach to the instrument.

A demo tape Eddy made found its way into the hands of Coolidge, Ariz., disc jockey Lee Hazlewood. The two soon met, forging an enduring and highly successful production and co-writing partnership founded on Eddy’s unique guitar sound and Hazlewood’s experimental vision in the recording studio.

1958 debut album Have ‘Twangy’ Guitar, Will Travel was a rock ‘n’ roll milestone. It charted for 82 weeks, contained six instrumental hits and was one of the first stereo rock ‘n’ roll albums. This, incidentally, was the start of a trend in which Eddy’s album titles often punned on the word twang, such as The Twang’s the Thang (1960), Twistin’ ‘n’ Twangin’ (1962) and Twangin’ Up a Storm! (1963).

The record-buying public loved the sound. Eddy infused his songs with elements of country, blues, jazz and gospel, and his many hits bore evocative titles such as “Rebel Rouser,” “Forty Miles of Bad Road,” “Cannonball,” “The Lonely One,” “Shazam” and “Some Kinda Earthquake.” The singles started in 1958 with “Moovin’ and Groovin,’” and all were filled with rousing rebel yells and brilliant sax breaks. They opened the door for rock ‘n’ roll instrumental music, and Eddy’s band, the Rebels, included musicians who went on to become some of the world’s best-known session players. These included saxophonists Steve Douglas and Jim Horn, pianist and acclaimed bass guitarist Larry Knechtel, and guitarist Al Casey, all of whom played on literally hundreds of hit records as members of the famous Los Angeles “Wrecking Crew” session group of the 1960s.

The 1960s were a blur of touring and recording for Eddy, who produced more than 25 albums encompassing a broad array of themes. He scored big early in the decade with movie and television themes (“Because They’re Young,” “Pepe,” “Peter Gunn,” “The Ballad of Paladin”). He recorded country and surf material (1963’s “Twang” a Country Song and Surfin’ With Duane Eddy, respectively), an album of acoustic folk (1960’s Songs of Our Heritage), and even an instrumental collection of Dylan songs (1965’s Duane Eddy Does Bob Dylan).

The 1970s were just as busy for Eddy. He produced albums for Phil Everly and Waylon Jennings, and 1975 collaboration with songwriter Tony Macaulay yielded top-ten U.K. hit “Play Me Like You Play Your Guitar.” 1977 hit country single “You Are My Sunshine” featured Jennings and Willie Nelson.

Eddy assembled a new band in the early 1980s for a series of well-received small club shows in 1983; the lineup included old friend Steve Douglas on sax and acclaimed guitarist Ry Cooder. Three years later, in a seemingly unlikely but wholly welcome twist, U.K. dance-pop collective Art of Noise enlisted Eddy for a 1986 remake of “Peter Gunn” that brought a new twist to Eddy’s 1960 hit, reached the top-ten worldwide and won a Grammy as that year’s best rock instrumental.

In further acknowledgement of his contributions to popular music, Eddy was inducted into the Rock and Roll Hall of Fame in spring 1994. Millions of theatergoers that year heard “Rebel Rouser” in Forrest Gump and “The Trembler” in Natural Born Killers.

When Oscar-winning composer Hans Zimmer invited Eddy to work with him on the soundtrack to 1996 film Broken Arrow, Zimmer noted that “I always thought that Duane’s style was being ripped off by the spaghetti westerns. This time I got the real thing.” The theme Zimmer and Eddy created together was also used in 1997’s Scream 2.

Eddy received Guitar Player magazine’s “Legend” award in 2004; only the second guitarist so honored (the first being one of his own idols, Les Paul). He appeared at the Hollywood Bowl in June 2008 to celebrate the 50th anniversary of rock ‘n’ roll performances at that famous venue; an event that bore special significance because, at the Aug. 24, 1958, “Salute to Dick Clark,” Eddy was the headlining artist for the first rock ‘n’ roll show at the Hollywood Bowl.

During an extensive U.K. tour in 2010, Eddy’s perpetual coolness was honored by popular British music magazine Mojo, which bestowed its “Icon” award on him at a June 10 ceremony in London.

Eddy was inducted into the Musicians Hall of Fame in 2014.

A true pioneer and living legend, Eddy continues to perform globally and Gretsch is privileged to be part of his extraordinary and lasting legacy.

The King of Twang sits down with Gretsch to discuss his early years, his formative years, his influences, his first gig (on a morning radio show in Arizona), his first song ("Moovin' 'N' Groovin'"), and much more ...

The Gretsch Sound of Honor Sweepstakes